What Was the ABT Braking System?

What Was the ABT Braking System?

Beginners and novice skaters need brakes to stop. This system enables skaters to control speed and balance stability during skating. Manufacturers introduce various brake system to help skaters. This detailed article will entail information about the different braking systems, especially the ABT braking system, which has now phased out due to a lack of interest from skaters.

Braking systems enable you to control the riding speed and to maintain stability during skating. You can take part in fitness, dancing, or speeding with a pair of inline roller skates. Watching people gliding through road, parks, and school gym may amaze you.

You can cruise on roads too with speed and enjoy a perfect and smooth glide. But wait for a sec; before challenging yourself, you need a practice of inline roller skating and stopping when you need it.

Novice or beginner skaters need to learn how to stop or use a brake system to avoid injury or any accident.

The braking system provides support and stability to beginners or novice inline skaters. This system enables skaters to control speed and balance stability during skating.

The pioneer in the rollerskate industry, Rollerblade©, introduced the ABT (Active Brake Technology) braking system. The idea of installing an ABT braking system in rollerblades offered in 1994, and the Rollerblade©, Inc. defeated competitors and won the best product award.

In this detailed article, we will discuss What Was the ABT Braking System? How does it work? Some pros and cons of the ABT braking system, and why ABT brakes bringing to an end.

1. An overview of the braking systems:

While you are fluent in skating, it is essential to learn how to stop. While you find an obstacle, slow your speed, or it is better to stop. It's better to use brakes instead of crashing into someone to avoid injury. Various manufacturers launch brake systems in rollerblades to prevent damage or to crash into someone.

There are three options promotes in numerous skating brands. Let’s have a quick review.

The inline skates have rubber enforced brakes extending from a plastic extension on the right side, but it can switch from right to left. Usually, recreational and fitness skates have a brake system. Experience skaters prefer to remove the brake system because it leads to complications during dynamic skating or jumping.

There are two options available in rollerblades.

The inline skates have rubber enforced brakes extending from a plastic extension on the right side. Experienced riders often tend to remove these brakes as it leads to complications during dynamic skating or jumping.

The Quad skates have a toe stop, which serves two purposes: to set off the skate with speed, and the other is to stop or reduce the rate by working as a brake. 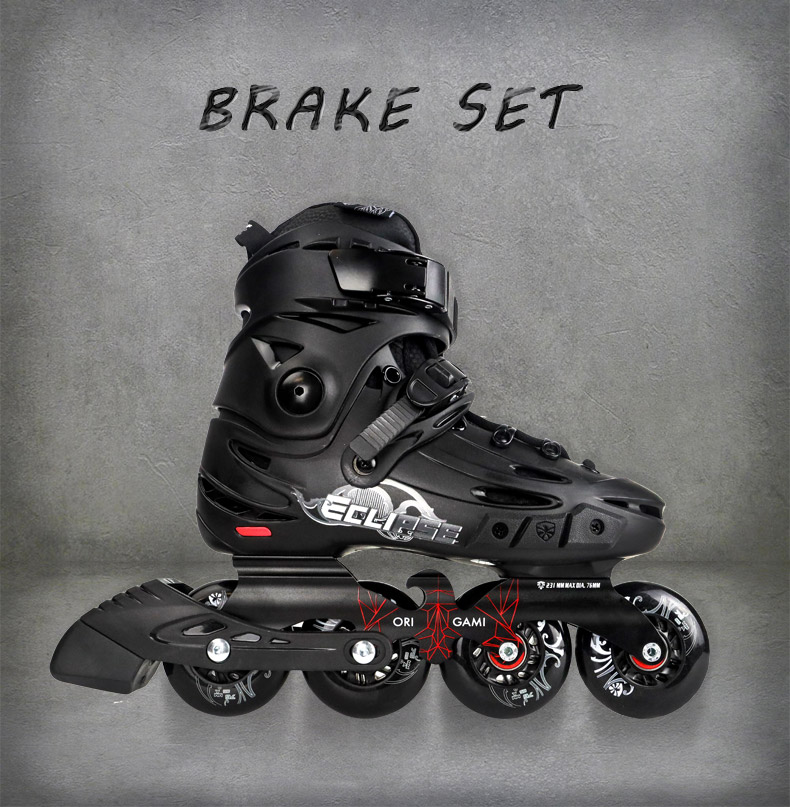 Specific inline skates, such as aggressive skates, race skates, and roller hockey skates, do not offer any brake. Experienced and professional skaters use these skates, and they think that brake systems tend to get in the way of performance.

The ABT braking system was introduced as an essential helping feature for novice and beginner skill-level skaters who were exploring the skating world for the first time.

The ABT brake system is simple and straightforward; it permits skaters to engage the brake pads by simply sliding their foot forward.

In the ABT braking system, the cuffs of the boot were connected with a pressure-sensitive braking arm. With the help of a wire, the long fiberglass arm is attached with the skate's back and attached to a screw that can adjust the brake height by moving the screw.

When the pressure was applying to the cuffs, the arm was pushed and intact with the ground. The skater stops and the process is completed. Any movement that involves leaning back or tilting it, applying pressure on the cuff and stopping the process starts.

Skaters can adjust the height according to their preference and last their brake pad life for a long time. The skaters can use the ABT brake system with confidence and in a stylish way.

The ABT2 braking system was launched as an updated version of the original brake design. The brake was made with lightweight magnesium and steel material. ABT 2 is the third generation of the ABT brake system and called the ABT lite. It offered an ultralight and more concise design that is perfectly fit into the inline skate boot and frame and used it as a powerful brake system.

The ABT Brake Mechanism is specially designed for the Macroblade 80 ABT and 84 ABT models by Rollerblade©. 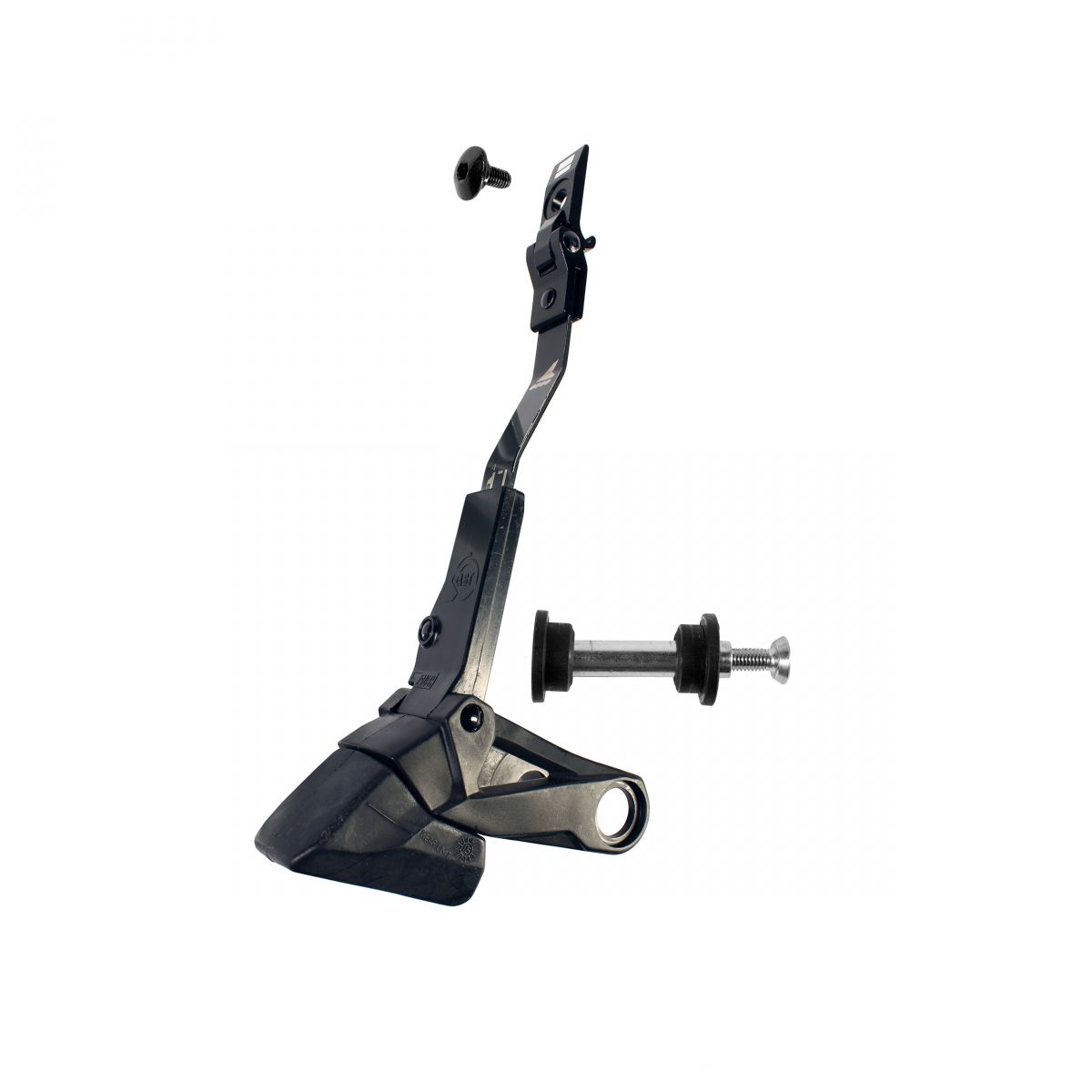 3. Pros of ABT Braking system

4. Cons of ABT Braking Systems

However, the ABT braking system provides more control and stability for beginner-level skaters who need a little extra confidence and support when stopping. But there are some disadvantages also found in that system.

The ABT (Active Brake Technology) offers for those skaters who didn’t build their confidence but still want to skate like a pro. The ABT enables all skill-level skaters to glide smoothly and stride with more confidence and control.

The ABT lower the speed of the skaters and remain all the wheels intact on the floor. The presence of wheels on floor provide more confidence to the skaters.

The ABT brake can be switch from right skate to left skate easily.

The skaters need to use heel brakes or toe brake to stop in some situations, even in the presence of the ABT system. Therefore, the beginners preferred to learn the T-stop method or using heal or toe wheels to stop.

The cuff activated system is no longer offered in rollerblades; even the product range by Rollerblade© does not offer the ABT feature. Some of their previously launched models are equipped with ABT brakes system and replacement pads to serve beginners and novice skaters.

Now that you are well aware of the appropriate types of brakes you should be choosing for yourself with this article. Either be it speed skates（Speed Skating）or fitness inline skates, when you feel like rollerblading outside, you know which brake system you need to choose.

You may be a street skaters, a dancing skater, and a free spirited roaming freak or speeding skater maniac, both type of rollerblades ensure nothing which is utmost fun, thrill, fitness and adventure. Thus, if you are looking for a place to order inline skates for outdoor use or inline skates indoor specific usage, go nowhere in vain!

Order now your desired skate at the most reliable and trustworthy site having premium inline rollerblade collection at https://inlineskatelover.com/